Make a piece to depict a snapshot of your time in quarantine. What made you happy? What gave you joy? Use your brightest, boldest fibre, yarn, and thread, dig through your stash and find some treasure!

The theme is Quarantine Time Capsule.

Please send your completed piece with submission form to:

QSWFA will assemble the wall hanging quilt, attaching each square to a suitably firm, secure backing with quilt-hanging equipment.

Stay tuned to ABC Radio Brisbane Breakfast with Craig and Loretta on 612AM for progress updates and check out our socials:

Thank you so much!!!

Every year on Easter Sunday morning we do an Easter Egg hunt in the lounge room. (Even though my boys are 22 & 25 yo and past this little kids game, they still love the family and competitive race to find the most).

This year a bit different since we can’t all be together in the living room on Sunday. I made these crocheted eggs. Not the same as a “hunt” but still feeling the family love.

Push in some stuffing until full

Push in more stuffing to fill the cavity. Fasten off, leaving a tail long enough to make gather sts through last round. Pull tail until closed and tie off. Pass remaining tail through the cavity and out, trim. 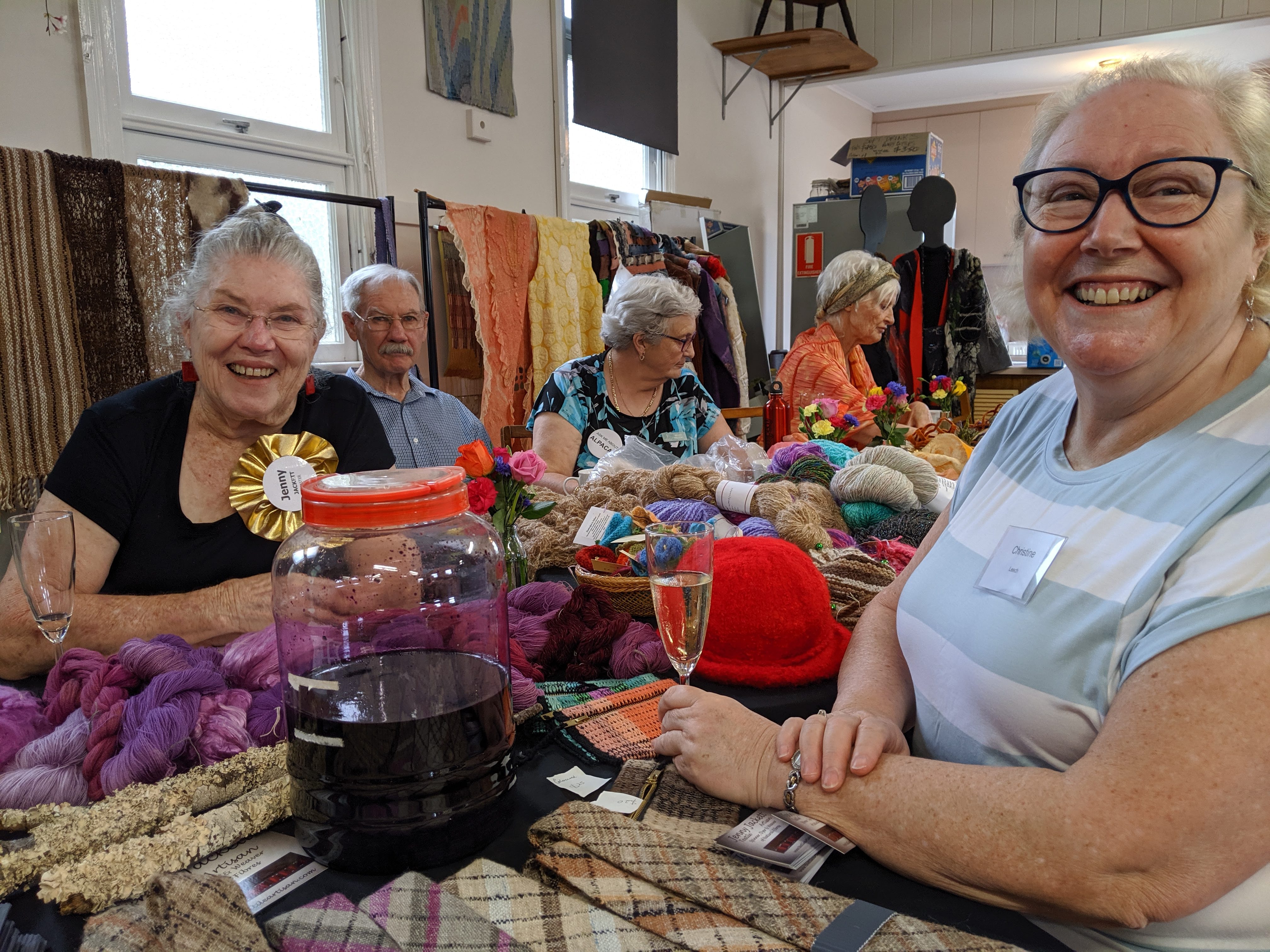 What a wonderful way to celebrate the masters of our arts. A delicious morning tea, a glass of bubbles and the opportunity to chat to amazing women at the top of their field.

We are back for part three, with a whole week of cuddles and pouch making for rescued marsupials.

We have put together a Crafting Event Week to entice our members and outside crafting visitors to Fibrecraft House four times in one week to help produce pouches – particularly aiming to give people who work during the day an opportunity to get involved with “Operation Cuddles”.

We will have the hall set up in the ‘production layout’ used for the first ‘Operation Cuddles’ in November 2019 and for three evenings and one day we are inviting the general public crafters to join in with our regular activity groups. This will be another great opportunity to get crafters into Fibrecraft House to see us ‘in action’ with the promotional support of the ABC and RSPCA.

Members of our ‘regular activity groups’ are welcome to continue doing their usual ‘crafting thing’ each night so that our visitors can see our talents in action, however, everyone is welcome to participate with some ‘pouch crafting’ too.

Looking forward to creating with you,

Thanks so much to all the folks who came along to make marsupial pouches on Thursday 21 November. It has been so successful and awakened a movement! We made 576 pouches in one day……. amazing! Great job everyone.

Let’s not stop here. Operation Cuddles is back by popular demand on Tuesday 26 November from 10 am till 3 pm.

Join our working bee to make pouches for orphaned wildlife for the RSPCA.

Let’s use our craft skills to help native animals injured and displaced by bushfires. We are going to make marsupial pouches, RSPCA instructions here. We will sew, knit, crochet and felt pouches for sugar gliders, possums, kangaroo joeys and koalas.

Thanks so much to full circle fibres for their QLD cotton jersey donation.

Our revamped instructions and sizes are here. (We learnt from our first day’s experience) Perhaps it’s best to check with your local Wildlife Rescue or RSPCA to see which size they require.

If you would like to make some at home you could drop the finished pouches into us at 12 Payne St Auchenflower or to your local RSPCA or wildlife rescue group.

Join our working bee to make pouches for orphaned wildlife for the RSPCA.

Let’s use our craft skills to help native animals injured and displaced by bushfires. We are going to make marsupial pouches, check them out here. We will sew, knit, crochet and felt pouches for sugar gliders, possums, kangaroo joeys and koalas.

Bring along some fabric: cotton jersey/flannelette/wool fabric/fleece, or just come and help.

Thanks so much to full circle fibres for their QLD cotton donation.

We will have scones for morning tea. BYO lunch or join us for pizza.

You can SELL!
Do you need to spring clean or de-clutter?
Then sell YOUR extra crafting supplies at the QSWFA stash bash.
Get a table for $10. You set your own prices and handle your own sales, we don’t charge commission. At the end of the day, you take home any items that you haven’t sold.

Prefer to donate?
You may choose to donate items to QSWFA for us to sell. We keep any money received and anything not sold is ours to keep, donate to charity, or dispose of.

How do you get in on this action?


Come to get a bargain between 9am and noon!

Get your space here on Eventbrite

Our Emporium will be open for business – Tea, coffee & fresh scones available

Jessica Anderson’s Miles Franklin winning novel Tirra Lirra by the River has been imagined by Anna Spiro into a beautiful room at the state library as part of the Brisbane Writer’s Festival. We have been invited to be a part of the art installation over the opening weekend.

Our BIGGEST day of the year did not disappoint! We opened our doors to visitors to show off our hand made fashions in a parade and the members’ gallery shop.  The trader stalls and our own Emporium shop were well equipped with everything you need to start making!

A visit to our scrumptious cafe was a must after checking out the demonstrations, workshops, and bits and bobs from the 2nd hand stall.

Did you see it all? Not to worry? Just 12 months until our next Open Day!

A beautiful warm autumn day at Mt Coot-tha Botanic Gardens today for a few of our members demonstrating our crafts.